One of the questions I’m asked most often is “how do I make social media work for me?” This is a loaded question with an infinitely long answer, but recently I’ve noticed that I keep boiling it down to the same thing each time.

Social media changes constantly, and it’s hard to keep up with. However, the theory behind social media (and the reason we’re all on it) doesn’t change. For this reason, our vision for social media and reason for using shouldn’t change – just the methods in which we’re using it.

Most business owners measure their success in social media by their number of followers. When someone asks us to work with them on social media, their first goal is almost always to “get more likes on my Facebook page.” That’s usually a good cue for me that our first step needs to be helping that owner change their way of thinking. Social media should be all about quality interaction and engagement, not about the number of people who clicked “follow” or “like.”

Let’s illustrate this with a scenario…
Barry Businessowner invites me to go with him to a networking event, with the goal of sharing our businesses with other people and building relationships that could turn into business. I’m really excited about the chance to get to meet some new people and share with them what I do. I get dressed up in a nice suit, make sure I have plenty of business cards, and get ready to leave the office. As I’m leaving, I grab the “like cards” from my desk – as well as an empty box saying “Place ‘Likes’ Here.” Now I’m ready. 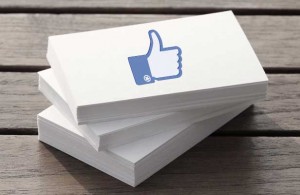 I get to the event and am stoked because I realize how great this is going to be for my business. I’m going to sit and let people come to me some, and then I’m going to work the crowd some. I place my Like Box on the table and get out my stack of “like” cards. As I’m sitting at the table having a drink, I chat with a few people I know. We catch up on what’s new with them, make the usual small talk, and they move on to talk to other people. After I sit at my table for a while, I realize I’m not making new connections (which is my whole point in attending the event), so I get up to move around and talk to people.

I stop at a table and meet a gentlemen who owns a landscaping business. He’s been in the area for 2 or 3 years and is getting his business moving. We talk for a couple of minutes, and before moving on, I drop one of my “like cards” on his table. He gives me a weird look. I smile and move on. Throughout the evening, I repeat this process a number of times. I make my way back to my table, find my “like box,” and realize it’s empty. I leave disappointed and dejected, feeling like the evening has been a waste of time and not understanding why people didn’t connect with me more. Barry, on the other hand, leaves beaming, telling me that he had a handful of great conversations and made good strong connections he thinks will turn into business for his firm. I just don’t understand what I did wrong.

Now, clearly this is an exaggerated situation and nobody interacts with people like this, but we do think this way about social media. Where are we going wrong?

Granted, interaction between people and brands is a little different – but the philosophy is the same. I recently heard a quote that rang true in my life:

I’d rather have 4 quarters than 100 pennies.

This quote was referring to the amounts of friendships we cultivate – I’d rather have 4 close friends than 100 acquaintances. Our feelings about social media should be the same! I’d rather have 500 fans of my page who are connected to my brand – and want to be connected – than 2,000 likes who are there just watching, but not connecting.

If I had spent my time at the networking event talking with other owners about their businesses, asking them questions about their goals and desires, maybe I would have made some valuable connections. If, instead of awkwardly throwing the “like” card down on the table after an interaction, I had discussed with them why I enjoyed what they had to say, I would have cultivated real connection and started a real relationship. How much more beneficial would my time have been then!?

When thinking about social media in the days to come, I urge you to think of these points in planning your posts and interactions:

What’s something you can do to succeed more with your social media? I’d love to hear some successes and failures you’ve witness (or created)!

I'm a marketing professional and entrepreneur focused on helping small businesses succeed. My philosophy for life: wake up full each day, and end the day spent, having given everything you possibly could.

This site uses Akismet to reduce spam. Learn how your comment data is processed.